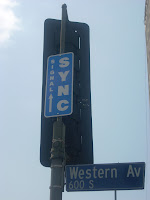 Have you seen these signs along Wilshire Blvd?

I don’t often drive Wilshire. But when I do, it always seems to be the peak of afternoon rush hour. (Maybe Wilshire always feels crowded?) So as I sit at another red light, I look at these signs and just shake my head in frustration.

It turns out, there are times when Wilshire isn’t completely jammed. I found this video on YouTube (uploaded by user Tom Kim). He probably wanted to film an artistic view of the city. But there’s more to the magic.

Once the cars which fill Wilshire’s rush-hour-filled lanes finally reach their garages for the night, the street becomes one of Los Angeles’ great boulevards to cruise. And finally the SYNC signs make sense. Take a look at how many green lights Tom makes:

Not taken for granted

Since I spend the majority of my time away from the great state of California, it’s easy for me to contrast the Southland’s well-synced signals to those in other places.

You see in places like Utah, there just isn’t enough traffic to force engineers to make the signals work correctly. If there’s wasted green time in an isolated town of 70,000, what’s to lose?  But if light at Cloverdale decides to generously give two-and-a-half minutes of green time to the neighborhood, the backup on Wilshire could cause a domino effect bringing the Miracle Mile to its knees.

California does it right … because it HAS TO get it right. As opposed to Provo:

Now, to UDOT’s credit, I hear they will be soon taking over all of the city’s lights.  The UDOT guys are good.  They’ll get the sync working right here, too.