This could be what the commercial district near University Parkway in Orem could look like in five years. While it isn’t the prettiest-looking solution, I think the city of Orem would open their arms wide to embrace a $50,000,000 solution like this.

The intersection is terrible. Among the busiest in the entire state (third, actually). It doesn’t help that one of them, University Parkway, is the only major east-west freeway connection for a four-mile stretch of I-15.

A century of “small town” thinking have left few major roads to move the county’s half-million-plus population. Here is where two of those roads meet: 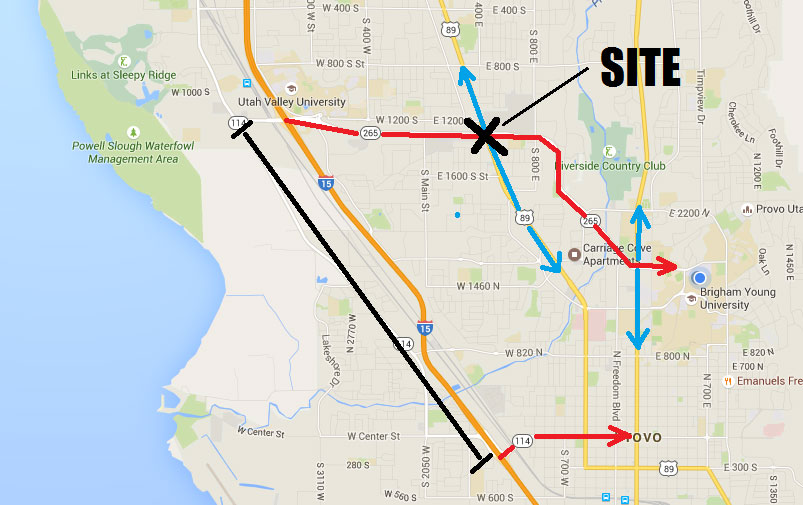 The signal was approaching failure a few years ago. I remember sitting through multiple green lights during rush hour. Some traffic wizards cast a spell and, with new signal timing, the intersection works for now — but, there’s no better way to say it, the intersection still sucks.

The county’s cities are starting to “think big.” Projects like this one, North County Boulevard widening, Pioneer Crossing, and the future Provo-Orem bus rapid transit (BRT) are the beginnings of big city improvements which will help correct past mistakes.

While it’s far from being a done-deal, it appears MAG (the county’s metropolitan planning organization) and UDOT Region 3 (who oversees state-owned roads in this county) are aggressive in solving the short and long-term capacity problem here.

I’ve long dreamed for an improvement here. It’s my own route for freeway access besides a much slower road many miles south that runs through Provo’s downtown.  I’d daydream about being able to bypass the intersection while cruising at 50 miles per hour.

My dream came true when I saw grade separation (much cooler than using a CFI displaced left-turn at-grade intersection) show up on the long-term regional transportation plan: 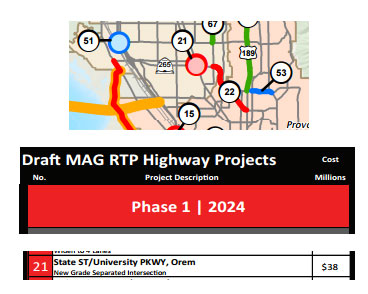 MAG, the local MPO, is not afraid to put ambitious “vision” projects on their RTPs. For instance, they want to build a beltway around Spanish Fork and span a bridge across Utah Lake. I’m skeptical either one will ever see construction, as does MAG, who lists those as “Phase 4: Unfunded Vision” priority.

But this one seems more likely. “Phase 1” means serious study and engineering, and more importantly searching for funding, needs to get started if they are going to open to traffic before 2024.

Money Where Your Mouth Is

On Friday we’ll find out how serious the State of Utah is about making this happen.

The State Transportation Commission, a committee appointed by the governor who act as an independent advisory to prioritize road project funding, will vote on a proposal to spend over a million dollars (chump change in transportation) to study to feasibility of building a highway overcrossing at the intersection of University Parkway (SR-265) and State (US-89).

The commission doesn’t appear very political in their voting. If UDOT proposes something, they appear to get what they want 99-percent of the time.

Then we’ll have to cross our fingers that:

Bureaucracy has so many moving parts, even a “done deal” can easily come apart. It helps when local mayors and state agencies are motivated to make something happen. We’ll see what happens.